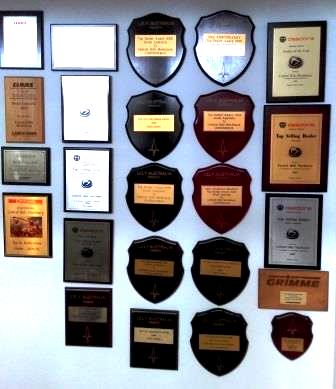 A small selection of accolaides Tony Cross has achieved over the many years selling agricultural machinery.

Central Hills Machinery is one of the oldest machinery dealerships in South Australia – for 5 decades, we have provided quality sales and service to customers across South Australia and beyond. We import much of the equipment direct, which saves the customer a third to half the price of most other machinery.

We deal with all aspects of agriculture, including:

Based at 5 Secker Road, Mount Barker in the Adelaide Hills, our dealership is conveniently located for local residents and beyond – being only a short distance from the Mount Barker freeway turnoff.

We carry 40 to 50 tractors in stock at any one time, as well as over 100 pieces of linkage accessories for your tractor at any one time, making it easier for you to find what you are looking for – quality equipment that is appropriate for your agricultural needs. Central Hills Machinery Traders are award winning Daedong dealers, and have continued this standard year after year. Whether you are a weekend hobby farmer or a broadacre grower, we’ve got you covered.

These machines are part of a single 25-tractor sale to Mr. Richard Shaw & Sons from Ballastone Vineyards in 2006, who have now owned approximately 40 Daedongs over the last 13 years.
.

Tony Cross, Director of Central Hills Machinery is a fifth generation mixed farmer from the North West coast of Tasmania. He was one of the third largest seed and commercial potato growers in Tasmania who worked with McCains and Edgels potatoes, experimenting with seed potatoes for Australasia. He also designed a 3-row potato planter which is still being used successfully in Tasmania and Australia for potato planting.

Whilst in Tasmania, he worked at several agricultural machinery dealerships as a sales manager – the largest being Gaffney’s Machinery. He also introduced many different types of European machinery and different ways of cropping to Tasmanian growers – gleaned from the experience he gained whilst travelling around the world working with farming communities. One such trip involved working with a Tasmanian association called Simplot Industries together with Chamble AgriTech (the largest fertiliser company in the world) in an advisory role in Punjab to set up their distribution warehouses for potato seed growing. Another was working with Milestone Agricultural Machinery – a world-leading company in Idaho, travelling extensively to the North American potato growers.

Tony then moved to Victoria as a sales area manager for Lely Australia in Rochester. At the time, his area was achieving $1.5million wholesale per year, and in 13 months he had increased it to 3.2million. He also quadrupled their sales in different areas, so he then went on full contract with the company. One of these areas was mouldboard ploughing, as in Tasmania he had ploughed in the world ploughing competitions and won many events. He then went to work as a Sales Manager for Warnambool Agricultural Machinery – Victoria’s biggest CASE dealership. In 1998 Tony was offered a manager’s position travel to South Africa and work for Lely Industries in Holland, in order to increase their market share in South Africa, however due to the current political unrest at the time it wasn’t safe and didn’t eventuate.

Tony then purchased Central Hills Machinery Traders (CHMT) in 1999 with a turnover of $930,000. In 2 years the spare parts department alone reached $1.2million, and by 2003/2004 it was turning over approximately $9million. CHMT has been in operation for nearly 50 years, and is one of the oldest agricultural dealerships in Australia.

In 2008, CHMT went on to be the largest retailer of all Claas machinery in Australia, along with being the biggest Daedong dealer in Australia and the biggest Grimme harvester reseller in Australia. Both Central Hills Machinery and Tony Cross have received many accolades for being the top selling dealership along with top salesman’s awards. Tony also has a letter from Lely Industries in Holland for selling the most machinery in a year within Lely’s world distributorship in its history. In 2004-2005, David Edwards, Westpac’s Corporate Division’s Bank Manager, voted Central Hills Machinery one of their leading and up-and-coming businesses in SA.

At present, Central Hills Machinery continues to be a leader in the industry as the clientele over the last 15 years has moved from being 95% large growers and 5% small weekend farmers, to being 95% small farmers and 5% large farmers. Central Hills Machinery is still PFG’s industry leader by being their oldest and biggest dealer. CHMT became a distributor for Mahindra in November 2015, and became their biggest dealer by June 2016, selling 25% of their turnover in 6 months. Our scope at present is to continue to import implements and tractors direct from overseas.